This diary was only ever meant to last 4 weeks. In that time Edward was supposed to have his operation, recover and come back home. Two months on, he is still not home. He will never come home. It is now time to stop this diary.

This is Edward’s blog, not mine. It’s not right to keep using it as an outlet for my grief. I can do that elsewhere. More importantly, its most significant role is still to come, when Alice and Arthur are old enough to read about their brother’s bravery and dignity. For those of you who remain interested, I will continue to write on my personal blogging site www.andywheatley.com in the ‘Life’ section. To everyone who has read and commented, thank you for your support throughout this journey. Tens of thousands of have joined along the way and have helped a grieving father more than they will ever know.

What started out as a journal of expectation became one of hope, then despair and finally grief. Despite what happened, I hope that I have managed to convey Edward’s courage and dignity, the tremendous legacy of love that he left behind and shown just how proud we are of him. Perhaps his story has even helped others in a similar situation.

In the two months since Edward died I have tried to capture how I feel but it’s hard to do justice to the depth of it.  I think the best I can do is to repeat what I said to a friend a few days ago. I feel broken. I will eventually put myself back together, but I will never be the person I was before. The pain and tears still come every day and it remains hard to believe that Edward is physically no longer here. The longing for a lost child is surely one of the hardest challenges life can throw at you.

But, there is hope. Despite the sadness, I have also been aware of immense love. Perhaps it’s just another symptom of grief that will fade away over time but it has been profound. From now on, I will try to live my life with a new perspective based upon this love that I have stumbled upon.

Before I sign off I want to say something. When Edward died, something happened. I have told close friends and family about it but have been reluctant to share it widely because it is deeply personal and, to be honest, open to ridicule. But it is important, because it completes a sequence of events that feels meaningful. I have also been brutally honest throughout this dairy and it would be wrong to leave something out just because I’m worried what others might think.

When we turned off the inotropes on his life support we knew that Edward only had a few minutes left to live. I feared that these last moments would be awful. We had been warned that he might fight for breath as his body searched desperately for oxygen and we prepared ourselves. Clare, as serene as ever, chose simply to lay with him, hold him tight, close her eyes and surround him with the love that she gave so selflessly throughout his life. I leant on the bed, to the side and slightly above them, with my arms around both, but kept my eyes open. These were the last moments that I would ever see him alive. I felt a need to witness every little thing, perhaps to help me accept that it was actually happening.

The minutes passed by. We whispered softly to him, telling him how much we loved him. As I stared at his handsome little face, hoping with all my heart that he would die peacefully, his mouth opened slightly. I readied myself for the worst, fearing a final, rasping breath. The so called death rattle. But to my relief it never came. Instead, he gently exhaled and something left him. A gentle pulse of light emerged from his mouth and disappeared into the air around him. It was silent and subtle, but just visible in the semi-darkness of the dawning day. I can still picture it now. Every time I remember that moment, I see that light.

I don’t know what it was, but I saw it. I instinctively felt that whatever animated Edward’s body, whatever gave him his personality and character, left at that moment. His spirit, his energy, his soul. Whatever you want to call it.

I turned to Clare, her eyes were still closed. Even though the monitor said that his heart was still beating I knew that he had passed away. I whispered softly, “He’s gone.” A couple of minutes later, at 5.28am, the line went flat. The official time of death. I kissed Edward and Clare, left the bedside and went to let Emily, our nurse, know that it was over. The doctor then came to confirm his death after which I made my way to the parents’ room, where John, Jenny, Fiona and Steve were waiting, to break the news. Four and half years of the most precious, beautiful and loved of lives had come to an end.

It pains me that only I saw what happened. Not just because of the impossible burden of proof but also because it was beautiful. I have played the incident again and again in my mind. Did it actually happen? Did I just see what I wanted to see? Perhaps I made it up retrospectively, or my mind has played tricks to comfort and protect me. No, no, no and no. It happened. I know it did.

I can’t explain what I saw or why I saw it and I am certainly not trying to insinuate anything or impose any beliefs. I am simply telling you what happened. I have searched high and low for accounts about the moment of death and for every person that claims to have seen or experienced something similar, there are as many saying that they saw nothing. All I can say is that, for me, it happened. If I said anything else I would be lying.

After a few minutes, Clare and I walked together to a side room whilst Emily removed the remaining tubes and wires and tidied up the bed. When we came back, it was clear that we were no longer looking at Edward, but just his body. The change in his appearance just in those few moments was stark but also reassuring. Without it I don’t think that we would have been able to leave him there and drive from London to Bristol to be with Alice and Arthur. We knew we weren’t leaving Edward alone, because he had already left. I said the same at his funeral, telling everyone not to be sad by the sight of his small white coffin. He was not in there. He was never in there.

Ten days later, the night before the funeral, I went alone to see his body one last time. I did so for selfish and cathartic reasons. Tim, the funeral director, opened the coffin and left me on my own. I cried more intensely in those few minutes than at any moment before or since his death. I let out a lifetime’s worth of anguish, Edward’s lifetime. A life that was so fragile from the day he was born yet so strong, dignified and happy throughout. I knew it wasn’t him in the coffin, but I felt that he was with me just as I have done ever since. It was like his hand was on my shoulder. By the time I had composed myself, I knew I would have the strength the next day to stand up in the church and tell everybody what I wanted to say about him.

For me, Edward has become love. There was a moment during his last week, when we still had hope, that summed this up perfectly. Jo, the lovely nurse who had known him since his first two operations as a baby, said something that will live with our family for ever. She said that love was keeping Edward alive. Jo repeated the same in her sympathy card some weeks later, adding that his calmness and dignity under such difficult circumstances were testament to the love that surrounded him. Thank you, Jo – this means the world to us. Once he was back in PICU, despite the constant rigmarole of tests and needles, he never complained, not once. It was if he was at peace with what was to come. As a family, we could not have loved him more and, in both life and death, he has shown me how important love is.

To all of you who have shared this journey with me, thank you. Your messages of love and support have helped so much. We have received so many that we cannot reply to them all, but we have read every single one. Many of you have also contributed to Edward’s Memorial Fund which has now raised over £14,000 for Little Hearts Matter and is still going. You have done so much already but I ask of you just one last thing. Our family will never forget him but it is only natural that, as time goes by, Edward’s story will become just a footnote in your lives. I ask, as I did at his funeral, that if you ever think of Edward, please let him inspire you to love your partner, children, parents and friends just a little bit more than you did before. Take time to look at each other, talk to each other and hold each other. We are all on this journey of life together. It will take us to places of happiness and joy but also fear and despair, but we can tell you from experience that, if you let it, love will help you through even the hardest of times. Thank you, goodbye and bless you all. 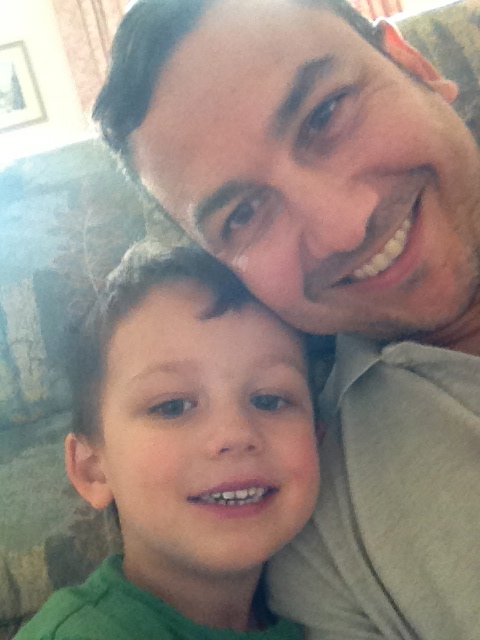 To Alice and Arthur, our beautiful children who have loved and lost with us, one day you will read this. If you somehow have any doubt, you will know for sure just how much you are loved and the role you played in making Edward’s short life so wonderful and precious. You mean everything to us. And, of course, my wife, Clare, the most private of people who has never read a single one of these posts but has always accepted my need to express my pain. We have walked this path together through great joy and immense sadness. You brought me Alice, Arthur and Edward, the greatest gifts of all, and are the rock on which we all stand. We are five. Forever.

And finally, to Edward, our beautiful, brave and wonderful boy. Your light shone so brightly and it always will. I love you with all my heart and miss you so very much. I will live every day of the rest of my life with you in my heart.

25 thoughts on “Time To Say Goodbye”