Since I last posted, it’s been my birthday, our wedding anniversary and we’ve had a short break in Cornwall. The birthday and anniversary were both pretty subdued affairs but they were still meaningful and a valuable reminder of the healing power of a loving family. Clare, Alice and Arthur bought me possibly the greatest birthday gift I have ever received – a beautiful framed family tree with all five of our names in it. There will always be five of us.

We returned from Cornwall late on Monday night. We wanted to get away, just the four of us, to help us get used to the idea of being a smaller family. We stayed at The Bedruthan Steps in Mawgan Porth and it was lovely. We were upgraded to a seaview apartment which enabled us to have as much privacy as possible and it has helped us start to get to grips with our altered family dynamic and prepare for our new lives.

I am learning that grief comes with many bitter sweet moments, and this holiday was full of them. For example, on the third day I realised that I had not cried for two full days – which promptly made me cry! I don’t know if this will make sense but, although the pain of a child’s death is awful, the absence of that same pain can be just as bad. Your mind starts to play tricks on you and you feel guilty for not being in pain. What’s more, the pain – as bad as it is – is also a source of comfort because it somehow reassures you that your child did once exist. Bitter sweet indeed. 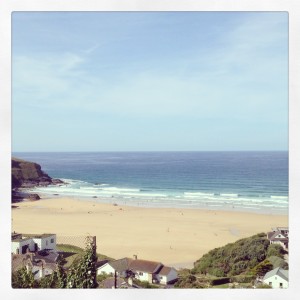 My tears are often caused by the simplest of things. We were having breakfast overlooking the stunning bay. Arthur and Alice had finished eating and were doing some colouring-in when I noticed that they were using some pencils from Hamley’s toy shop. Suddenly I was back in the store, with Edward, the day before his operation. He wanted me to buy him a zebra soft toy but I refused because it was too big. How pathetic that reason seems now, and how I wish I had got it for him. Instead I bought him some small Lion King figurines because they were easier to carry. They were the last toys I ever bought for him and seem so inadequate now.

Seeing families of five remains difficult and there were of course plenty of them at the hotel, blissfully happy and enjoying their holidays, just as they should be. I harbour no resentment at all and wish them nothing other than love but it is a painful reminder of life as it was. I often felt the urge to walk over to them and say that we too once had three children. I want to tell them we had a boy called Edward who was wonderful and that he would have loved to have met them. It is one of the greatest anxieties of bereaved parents that their child’s existence on this planet is forgotten or, worse still, never known. The latter is irrational because even if your child was still alive millions would not know about it. But grief is not rational.

I talk to Edward every day and will continue to do so until the day I too die. I haven’t lost my marbles in my grief but I know he is with me by being a part of me. I will one day relate a few incidents during Edward’s death and in the weeks since that will provide some background as to why I feel this way but if I do this now I know that many people will conclude that I am displaying what psychologists call ‘confirmation bias’. I can assure you that I am not. Anyone who knows me will be aware of how cynical I can be of things that cannot be proven but I have learnt so much in the last two months that will change my life forever.

One that I am happy to share now is my vastly increased appreciation of the wonder and beauty of the world around us. Although it doesn’t make things easier we always knew that we might lose Edward, and whenever I thought about it I assumed that my devastation would make me even more cynical, so it has come as a huge surprise to find that the opposite has happened. I see beauty everywhere I look and, although my heart is full of sorrow, I feel more love than at any point in my life. This is Edward’s legacy and I feel a deep responsibility to make sure that it lives on in the way I now spend my life and share it with others both personally and through work.

Back to the grief I am, for the want of a better word, ’embracing’ all of the emotions that it throws at me. The feelings are so intense that to fight them would surely store up trouble for the future. Emotions this strong will eventually surface somewhere and I am doing my best to make sure they emerge as safely and positively as possible. My family needs me to be strong and I firmly believe that this is best way to do it. Whenever the pain of losing Edward hits me I just let it come, no matter where I am or what I am doing. I cry when I need to, I talk about him when whenever I can and I also laugh whenever I feel it’s appropriate. I have even cracked a few jokes and been pleasantly surprised to find that my sense of humour is still intact and, in fact, probably more dangerous than ever.  However, I know that this also carries the risk of being seen as evidence that everything is ok but it certainly is not. All it means is that I am human and that I am finding my own way to cope.

Clare remains, as always, a rock but I worry about the next few weeks. Not only is Alice returning to school today but Arthur will be starting for the first time next week. Edward’s uniform, name tapes and scatchel arrived just before we left to go to hospital and have been a constant reminder ever since of his loss. It is going to be very hard to take only one of our sons for his first day – we will be so proud of Arthur, yet heartbroken that his best buddy isn’t there to help him and hold his hand. Edward might have been physically smaller, but he was the more confident of the two and would have looked after Arthur emotionally. It will be another bittersweet experience.

Alice and Arthur have become extremely close. Alice was already a super big sister but she was always slightly detached simply because her brothers were twins and often inhabited their own little world. She has taken Arthur under her wing and he in turn has ‘grown up’ significantly since Edward died. Whereas before he was the quieter of the two he has come out of his shell and is very talkative, and mentions Edward frequently. In Cornwall one evening we saw a very bright star shining alone above the sea and he said, without prompting, that he knew it was Edward and repeated it several times, almost as if he wanted to reassure us. He appears to be completely at peace with his brother’s passing, and never asks if or when he will come back but talks about what his favourite things were and the fun they used to get up to. That said, he has had some trauma of his own in the last few weeks. When we came out of hospital at the end of July, we noticed that he had what we thought was a small wart on his leg. We didn’t feel it was urgent and decided that we could get it seen to at the end of the holidays without any fuss. However, whilst we were in Sheffield it suddenly changed shape, grew enormously, became infected and started to spread. I had to take him to Sheffield Children’s Hospital where his leg was lanced which was very painful for him. It wasn’t easy for me either being back in hospital so soon after Edward’s death, especially having to deal with potential blood poisoning which played such a significant role in Edward’s troubles. The sore is still pretty large but is being treated with a third dose of antibiotics which we hope will get rid of it as soon as possible.

All said and done, we are where we are and nothing can ever change this. The whats, ifs and maybes are torturous but pointless and I am learning to ignore them. The sense of loss though is impossible to ignore because it is factual. We have lost our beautiful boy and he leaves a hole that will never be filled. But it is ok to cry about this and always will be.

I have said so many times before that, despite the sadness of this story, I want some good to come out of this blog. I have received many positive messages from other parents – some bereaved, some with sick children, but also some who have experienced neither. This means a great deal to me. If just one person finds some comfort or help in reading about our experience then it will be a worthwhile exercise.

In life Edward gave us nothing but love, and in death he has filled me with more of it than I ever thought possible. I hope that this comes through in the posts and that you can all feel the positivity that I am trying to convey.

8 thoughts on “Some Late Summer Sun”