Ned has had a pretty tiring day of tests and scans and is absolutely wiped out. I think he has now had 5 anaesthetics of some kind in the past 3 days and is drifting in and out of sleep constantly as a result. Following the doctors’ rounds this morning, we were told that he needed to have three things done – a new ventilation tube as the old one was leaking, a new vascular catheter (vas cath) for a better connection to the dialysis machine and an internal echo of his heart to check for any infections.

The three procedures took place over 5 hours between 11.00am and 4pm during which he was knocked out with more doses of ketamine. I just cannot get used to these and am always anxious throughout. Part of this I know is down to my lack of sleep, but I just can’t sleep anything more than a few hours at a time at the moment. It’s a vicious circle that is completely counter-productive. I trust his doctors and nurses completely, but I cannot bring myself to leave his side overnight. I’ve promised Clare that I will try to break this cycle tomorrow morning, as it’s not doing anyone any good to have an over-protective dad constantly on the warpath. 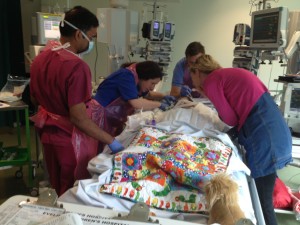 Ned being prepared for his three procedures this morning

The new ventilation tube and vas cath went without a hitch, although Clare was amused by my attempts to ask the doctor doing it if he had done all the necessary checks beforehand. I suspect that I am becoming a bit of a pain and I think they were all quite relieved when I retired to one of the parents rooms during the echo to try to get some ‘rest’. The echo revealed, thank heavens, that there is no infection in Ned’s heart but did show a couple of blood clots. We have been assured that these are not a problem and will be alleviated by one of the blood thinning drugs he’s on (heperin?) but again my tiredness caused me to over-react.

I am now, at 2.30am, by his bedside and there is quite a lot of activity around him. His blood pressure has been extremely variable today and right now is 52/30, which is getting close to the levels of that awful Sunday evening. It is disconcerting for sure, but we have also discovered over the past few days that he is able to tolerate extremely low pressure better than most people. The fact that he is able to communicate with us when it is this low shows that he is cerebrating, that is his brain is getting enough oxygen. Despite knowing this, it is a challenge to keep calm – the memories of Sunday night are very raw – but his superb team are always in control.

Ned’s new breathing tube unfortunately means that it is now going to be much harder to communicate with him. The last one was too loose, which meant that there was enough air in his throat for us to hear what he is trying to say. The new one is very snug and more efficient as a result, but it means that we can now hardly hear him which is a little sad. It is of course better for him which is much more important in the long term.

On the brighter side, we had two visits from friends in Cirencester today – Simon and Duncan. It was great to see some faces from our ‘normal’ lives. However, we also had to cancel visits from my father and Carolyn and my nephew George at the last minute because of the timing of the three procedures. It is very difficult to get the balance right and we hope that everyone understands that sometimes visits will need to be cancelled at short notice. Ned really is very, very ill and sometimes it’s just not possible to see him.

So, as we were told yesterday, we are now in a period of very slow, often painful and almost always anxious progress. It feels relentless at times and I know that I haven’t handled it particularly well today. It is my own fault and unless I get some sleep it is not going to sort itself out. Clare and I have talked about this and decided that I should go to Ronald McDonald House first thing in the morning before the doctors’ rounds so that I don’t get drawn into the day’s plan and worry about what’s ahead. With any luck, I’ll get enough sleep and be able to give you a more enthusiastic update tomorrow night!

As always, we are ever so appreciative of your messages of support. Even though I am currently an irritable over-protective and over-sensitive dad, I still love reading them. It’s also very comforting to get messages in the middle of the night when I am, as now, sitting by Ned’s side. Many of these are of course from friends around the world in different time zones, but some are from home (perhaps fellow insomniacs?), and it is lovely to feel that people are with us in spirit. Right now for example, I know that a group of friends in Cirencester are holding their third all night prayer vigil for Ned. Words cannot express our gratitude and we are humbled by the love and support being sent to us.

Thank you so much.

(By the way, whilst I have been writing, Ned’s blood pressure has gone up to 69/39, which is acceptable. It will almost certainly go up and down a few times before dawn. He is a little minx.) 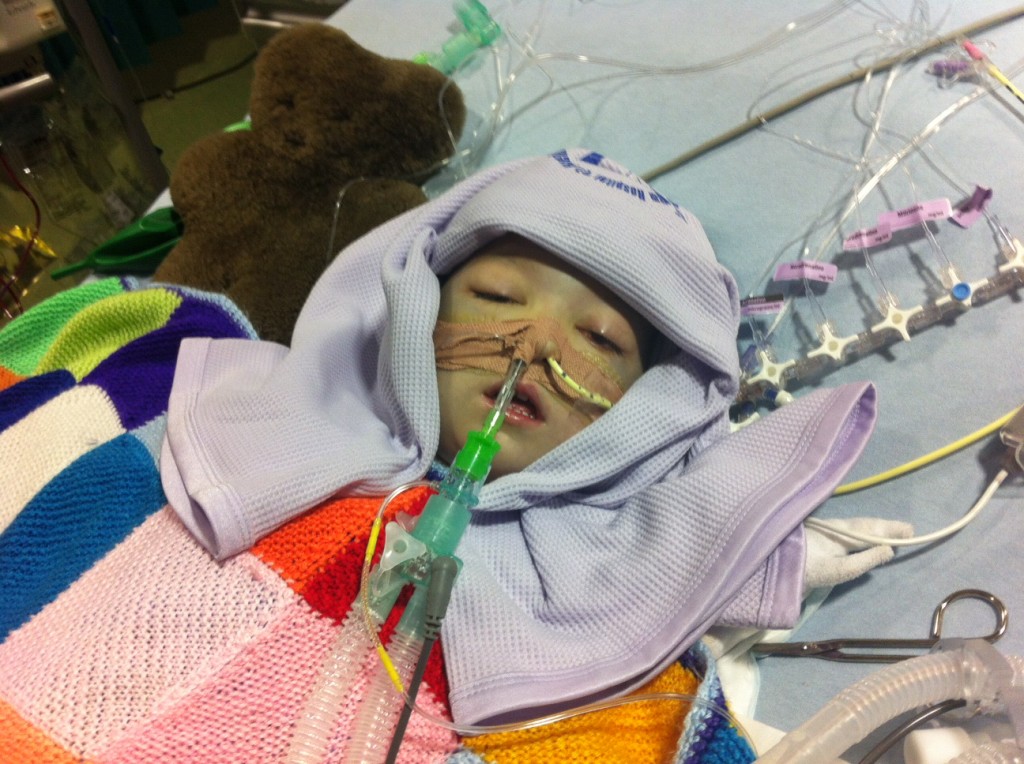 Ned as he is right now in bed. He’s looking a bit worse for wear today because of his three procedures and is wrapped up to get his core body temperature up which will help his blood pressure

26 thoughts on “It’s all about blood pressure. And sleep.”