I thought it would be good to give you all an overview of where we are right now. 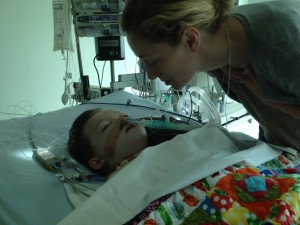 A morning chat with mum. Ned can hear us and we talk to him as often as we can

Ned is still critically ill and on a ventilator. It is a reflection of just how sick he was on Sunday that we now see this as a good place to be. To provide some perspective, the strain and strength of his staphylococcus infection frequently kills perfectly healthy adults. He is 4 years old and has a single ventricle heart. I want to shout from the rooftops of how proud I am that he has managed to fight it off, but I daren’t just in case fate plays another cruel trick. We are taking things one step at a time and looking no further than the day ahead. There is no alternative, because if you look at what he now faces in his climb back to health the scale of it is daunting. Without breaking it down into individual steps it verges on being overwhelming.

Ned is still fighting off the infection. It remains in his body, but is in retreat. It had spread throughout his body into sepsis (or septicaemia), an often fatal full body infection. It was in his blood and all his organs except, miraculously, his heart. We will never know why his heart managed to remain unscathed, but thank heavens it did. However, because it is still hanging around, we cannot take anything for granted. We cannot assume that it will not make a comeback. 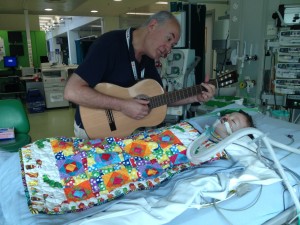 A song or two with Russ

His blood pressure is a constant worry and keeps fluctuating between acceptable and downright dangerous. I am sitting by him now on my night shift and just a few minutes ago it dropped to 55/32. Both his nurses, the night doctor and I watched his monitor with baited breath to see where it would go. It is now 66/37 which is still ridiculously low but we’ve come to accept this as reasonable compared to those dark hours on Sunday evening. We have decided however to give him a blood transfusion, just to be safe, as his haemoglobin levels are a bit on the low side. The blood is currently on its way via courier right now and will probably arrive at around 3am.

His kidneys are also a major concern. They have pretty much shut down and he is now on permanent dialysis. We simply do not know what condition they are in and have been told that there is no guarantee that they will work again. Bearing in mind what he’s already been through, kidney failure would be a real kick in the face but we are hopeful that, given time, they will slowly kick into gear.

We also don’t know if the fontan operation, the main reason why we came here in the first place, has worked. Before the infection took hold, his overactive drains and chyle in his fluids suggested that his body had not yet accepted his new circulation, but we had to put all of that on hold just to keep him alive. Even now, we still haven’t returned to looking at it and it is a great source of anxiety. Everything will be done to encourage his body to accept the fontan and he will be given as much time as possible to adapt, but if it doesn’t work he will have to face the awful prospect of being opened up again to undo it.

Time is now key to Ned’s recovery and we’ve been told that we need to be prepared for a very long haul. Ned’s journey from near death has surprised us all – several doctors have told us that they did not expect him to still be here – and it is going to be a painfully slow process from here on in. We have been told to expect many setbacks and not to get ahead of ourselves. Ironically, today is the day I originally predicted that he would be fully recovered from the fontan and back home. Please call me if you want any other predictions for major sporting events. 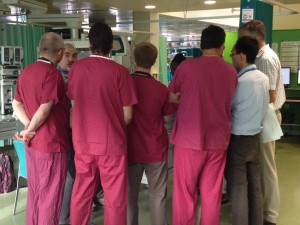 Every morning, the doctors, surgeons and consultants meet by Ned’s bed to discuss his options

From a very personal perspective, I would be lying if I said that I am taking this in my stride. Every morning we get a briefing from his doctors that often leaves me quite down. It is quite right that they urge caution but all I want them is to tell me that everything is going to be ok. They can’t do this. He is very, very ill. The list of things currently wrong with him is so long (I haven’t even touched on the myriad of ‘minor’ things – eyes, profusion, swelling, stomach bleeding, mental state) that it can be very dispiriting. That’s why we have to break it down into little achievable steps.

As for Ned himself, what can I say? He has achieved so much. He has stuck two fingers up to every challenge thrown at him. I sometimes wonder if, even in the midst of that awful Sunday evening when it looked like we would lose him, he thought there was much wrong with him, such is his almost nonchalant demeanour. I suspect he thinks the rest of us are fussing over nothing. In the future, it will be very hard to complain about anything without him rolling his eyes at us. He is one tough boy.

Despite these little anxieties and the challenges ahead, we are in general very positive. We have to be. This has been helped tremendously by the amazing messages of support we have had on the blog and Facebook. They are all wonderful, but I wanted to tell you about one in particular that gave me a huge lift. It was at the end of a 72 hour period in which I had only slept for 6 hours and I was feeling very low and emotionally broken. I was looking through the latest tranche of emails and found one from parents whose son has HLHS and had contracted staphylococcus following his fontan in 2004. He had also been at death’s door but is now a thriving 12 year old, and his mum sent us a photo of him playing on the beach just a few days ago. I cannot tell you how much this lifted me and it gives us reason to believe that our own faith in Ned isn’t just self-delusion. There is always, always hope.

63 thoughts on “A Mountain to Climb”