This is the first time in a few days that I have been able to sit by my son’s bed and take some time to write a proper update. The past 48 hours have been utterly surreal, and interspersed with periods of anguish, despair and joy. So much has happened since my last post and I will try to find the time to fill in the gaps, but right now I just want to tell you about Sunday night. I have had to think about it long and hard, as it is, by far, the most personal and emotional post I have yet written and I accept that it may not be appreciated by everyone.

Having had a day of relative stability, John and Jenny kindly offered to sit with Ned for a few hours so that Clare and I could have dinner together for the the first time in a while. We strolled down to Southbank and found ourselves a quirky little pizza place. We had just finished eating when Jenny called. Blood had been found in Ned’s stomach and his blood pressure had fallen. It was clear from Jenny’s tone of voice that this was serious. The walk back was torturous.

Upon arriving at PICU we were confronted by an awful scenario. Ned’s bed was surrounded by doctors, nurses and consultants with very grave faces. Although alarming, the blood in Ned’s stomach was secondary to what was happening to his blood pressure. It had dropped to 48/26 and was not responding to adrenaline, dopamine, milrinone or noradrenaline. Blood pressure that low cannot sustain life for very long. Ned was in very real danger.

The team had already contacted Great Ormond Street and The Brompton to enquire if they could help. Great Ormond Street in particular has a speciality in ECMO, which is essentially a complete organ bypass for life support, but it was felt that firstly, Ned’s condition was not suitable and, secondly, that he would not survive the ambulance journey. Ned’s only hope was a drug called vasopressin, which is extremely powerful and comes with significant side effects. However, we had no choice. If Ned was to have any chance of survival he would have to take it.

It was at this point that one of the nurses said, “If you would like a chaplain, now is the time to call him.” I looked at her in disbelief and asked simply, “Is it he that sick?”. “Yes”, came the reply.

Ever since Ned was born, I have never countenanced the idea that he might not make it. He is the strongest, most determined and gutsy child I have ever known. Even when he was seriously ill after his first surgery I turned down the opportunity to have a chaplain present because I refused to believe that he would give up but Jo and Thomas, two of the most senior doctors looking after him, explained that this was genuinely the last shot at sustaining life. If the vasopressin didn’t work, all that could be done would be to make our boy comfortable as his life slipped away. The vasopressin was administered and the chaplain was summoned.

There is nothing that can prepare you for a moment like this. Your child, lying helplessly in a hospital bed, on the verge of death, made even worse by the struggle endured by him since birth just to get to this point. My initial reaction was to give Ned a pep talk, to tell him to fight, whilst Clare focused on soothing and calming him. But we also had to consider the unthinkable and I briefly pleaded with him through tears not to leave us, crying quietly into his ear. However, I had to remind myself that this was about him, not us, and that if it was his time or if he had simply had enough it was our responsibility to let him go in peace with our permission, without the wails of crying loved ones and knowing that he had not ever let us down. Clare and I talked, hugged and cried, and agreed that he needed to know from us that it was ok not to fight anymore, no matter how desperately we wanted him to.

When the chaplain arrived, the medical team gave us some privacy and we all stood around Ned’s bed, holding his hands or stroking his head as he blessed him and asked for strength. I cannot recall a single word that the chaplain said. All I can remember is holding Ned’s hand against my cheek. I am not sure how we would have coped without John and Jenny, whose love and support are the backbone of our family. They comforted us and held us, all the while dealing with their own sadness and fears, the clear distress of one of their own children as well as the rapidly deteriorating heallth of a grandchild. I will be eternally grateful for everything they have done for us.

As soon as the chaplain left, the medical team were straight back in. They knew that the odds were poor but they were determined to give him the best possible chance. Once the vasopressin had been administered, it was topped up over the next couple of hours with blood, plasma and platelets as they fought desperately to keep Ned’s blood pressure up. Their dedication was, and remains, inspirational.

The first signs were not encouraging and it only just held above the danger zone. Amazingly, throughout the entire process, Ned was able to communicate with us by nodding or shaking his head. Occasionally, he would say something but it was hard to decipher due to the ventilator in his nose. One thing though was clear, he had no intention of giving up. 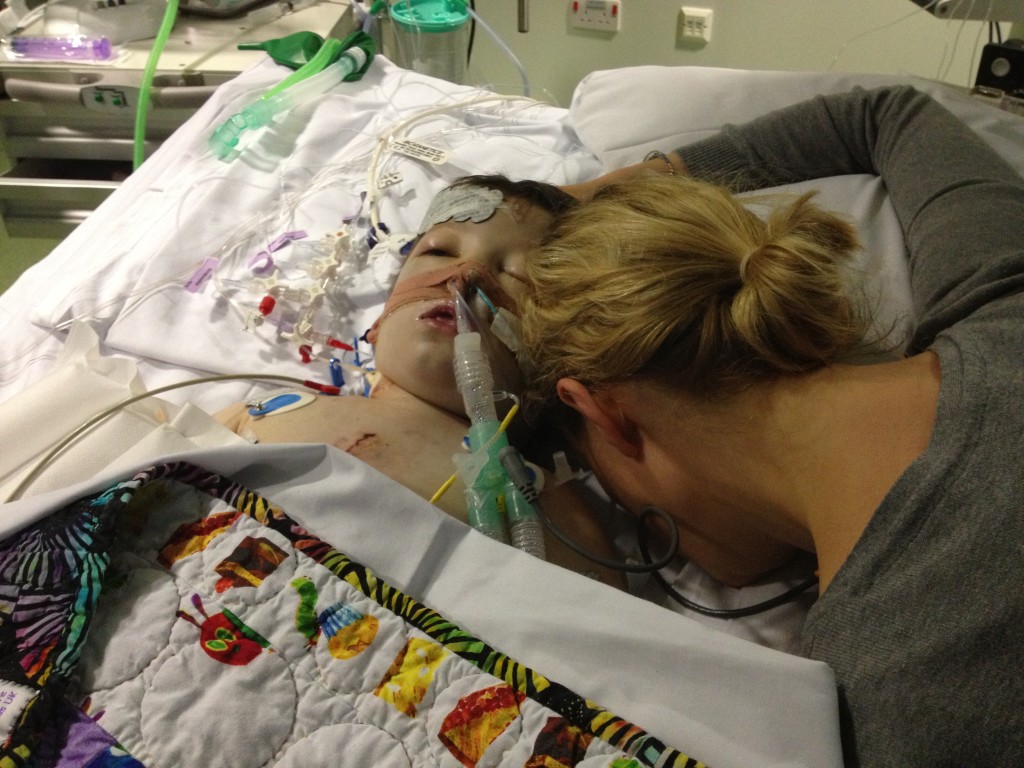 A desperately ill Ned is comforted by Clare, who kept this position for almost 5 hours.

We waited for 5 hours for his blood pressure to reach a sustainable level, during which time Clare did not leave Ned’s side once whilst I paced up and down unable to keep still. I have no doubt that Clare’s presence played a huge role in sustaining Ned and by the time dawn broke his blood pressure was around 52/40, which was still dangerously low but it could sustain life.

In the morning, once Clare had at last taken a break, John and I set about entertaining Ned by reading books, telling stories and generally playing the fool. Whether or not it had anything to do with us, Ned’s blood pressure continued to rise and by lunchtime had reached 70/43.

As I write now, some two days later, Ned’s blood pressure is 87/43 – still quite low by normal standards but acceptable for a boy with a single ventricle heart. It is still being supported by a cocktail of drugs and our priority now is to reduce these slowly over the next few days and allow his body to fight the infection. He is still, by any definition, desperately ill and looks awful. His body is bloated and bruised, and his face is almost unrecognisable. But he is still here, still fighting. I am of course biased, but he is a very special boy.

We have now found out that the virus attacking Ned is staphylococcus, which is pretty common but can be very dangerous once it infects a wound and potentially disastrous for cardiac patients. Ned has an extremely virulent form and we have been told that he is only the fourth ever documented case for an HLHS child making it very hard for the medical team to draw on case studies. They have however, been miracle workers and my new found admiration of all things German remains intact.

We are now back to taking everything hour by hour, step by step. There is no prognosis and we can only hope that he continues to improve and that his blood pressure holds as we slowly reduce the cocktail of drugs that maintains it. His body needs time to fight this wretched infection, after which we can resume his recovery from the fontan surgery which has been put on hold for the past week.

It’s been a dark few days for sure but whilst we dare not think that we might be turning a corner, we can see just a little bit of hope.